Incausa – In the cause of others.

Today, CNote is profiling Incausa, and its co-owners, Vinicius and Carolina. Together, they’ve built a company that sells unique goods across the globe but also supports indigenous artisans by selling their crafts and returning 100% of the proceeds to them. Incausa received a loan from a CNote partner that allowed them to scale their company without sacrificing their social mission.

The incense bundles Incausa sells are labeled with just a single stamp. Vinicius Vieira de Vieira, Incausa’s co-founder, explains that these bundles are crafted for meditation practitioners who find peace and harmony in the silence of their practice.

The stark labeling is an homage to that, as Vinicius says, “we have a bit of silence on our product.” 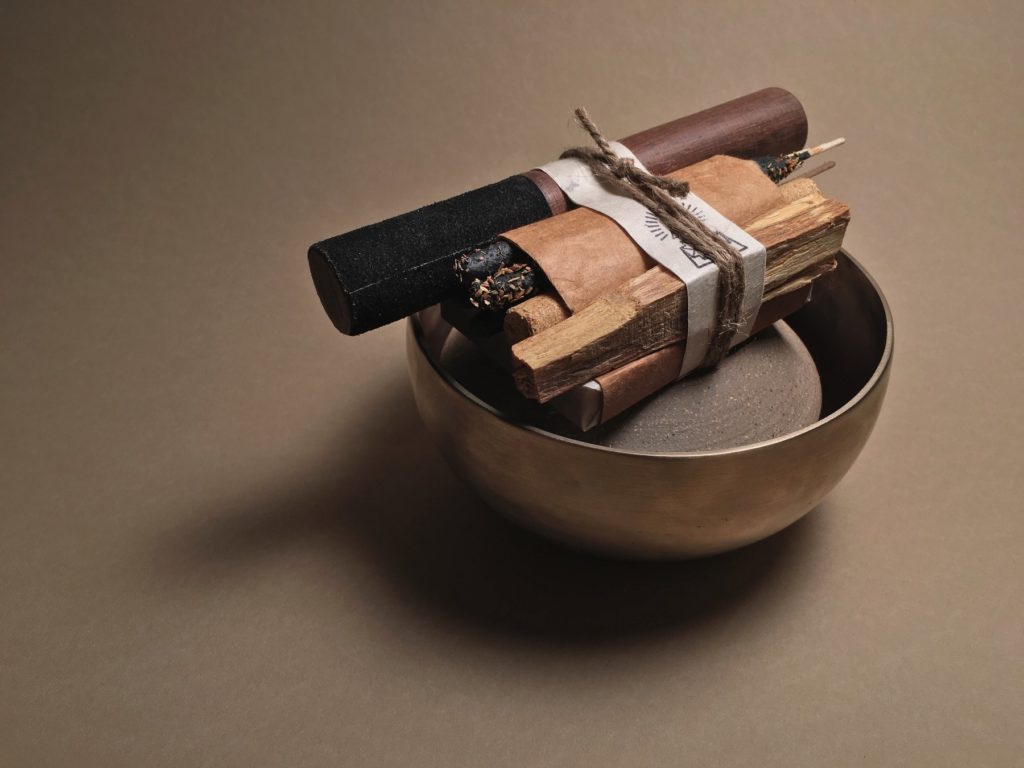 Vinicius is most focused on the components in Incausa’s products. The symbolism of practitioners using meditation to connect with the core of their humanity and nature is not lost on Vinicius .

This is Incausa is focused on designing a pure and singular product line.

In a world where packaging and labeling sometimes seem to matter more than the product itself, Incausa is completely focused on what it provides its customers. And its labeling, while stark, communicates what the products inside promise: purity, silence, focus.

Not surprisingly, Incausa’s focus on the needs of their customers has paid off.

The Humble Beginnings of Incausa

Initiated in 2012 by Vinicius with a $700 loan from his father. Incausa was formalized as a company in 2014, together with his wife Carolina.

Both natives of Brazil, Vinicius and Carolina shared the vision of creating a company that benefits the common good–one that’s financially viable for them and their employees, and that gives back by developing logistics infrastructure for Non-Profit wholesale distribution and market-placement of indigenous artisanship. 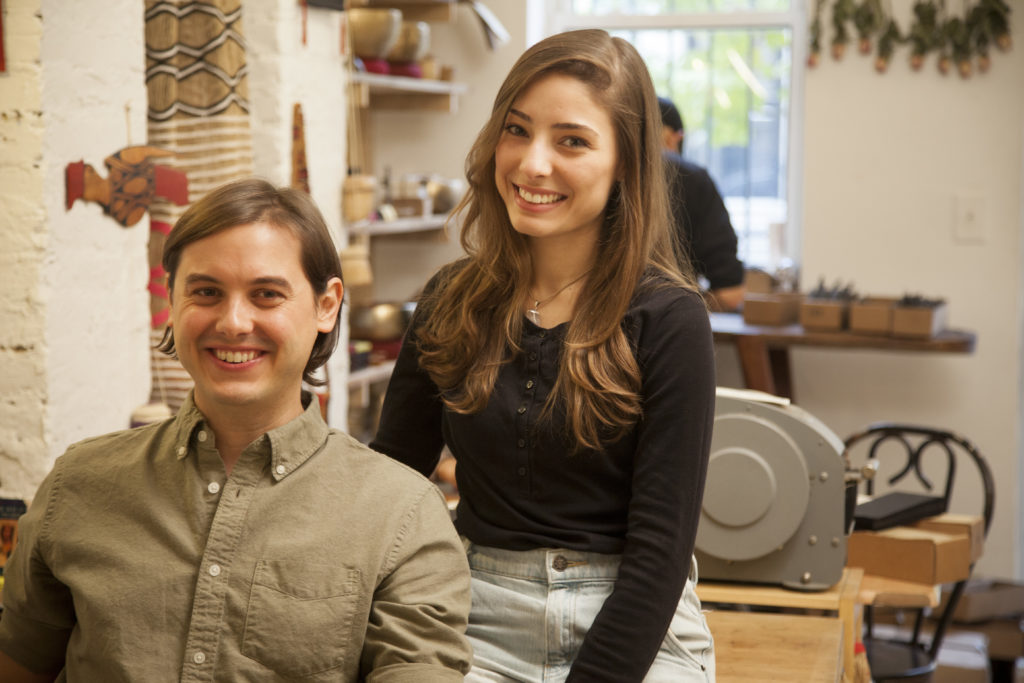 Vinicius commissioned all originating inventory he could afford with that 700$ loan. He’d then bundle those soaps and pieces of incense by hand in his kitchen and go to the heart of Williamsburg in Brooklyn and sell them out of a suitcase on the corner. 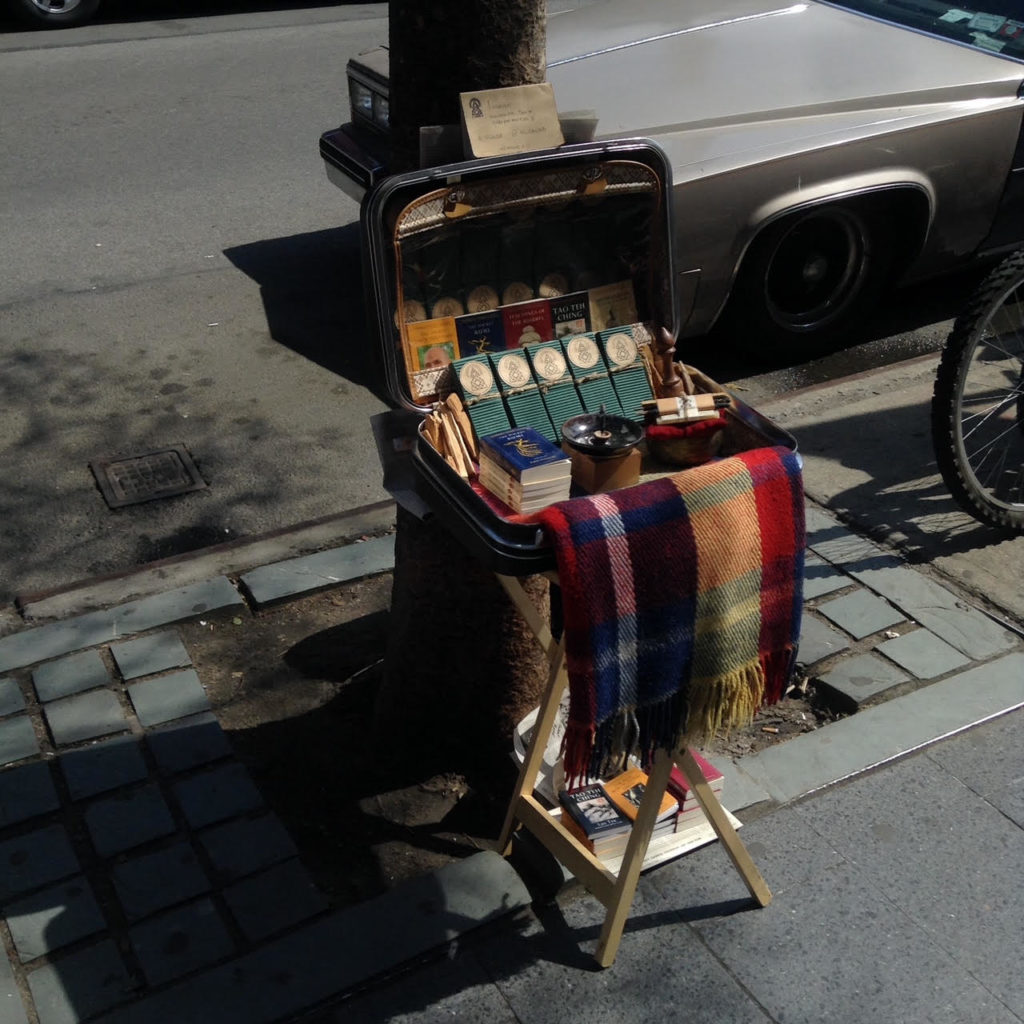 He would tell people, “If it’s sunny I might be here.”

Eventually, it led to local stores wanting to sell his product. International news coverage, and distribution in specialty stores across the world. And now, a full-fledged e-commerce presence.

For Incausa, operations started in a kitchen cabinet, grew to a table, then an entire basement, and finally on to a wholesale operations space.

Now, Incausa goods can be found in stores across the world. But their mission does not end there.

Social mission along with luxury goods

Vinicius reminds me that, “Incense brings people together as they share wisdom and embrace tradition.” He uses that to segue into his discussion about Incausa’s social mission.

Along with selling its line of incense, soaps, and other goods, Incausa also sells an indigenous line of goods. These sales don’t generate a profit for Incausa but they are an essential part of the social mission that Vinicius and Carolina care deeply about. The spell out the model on their website:

“100% of the proceeds received from the sale of indigenous products listed in this collection are returned to the artisans . We continuously learn the effects generated by capital to their communities and it is with great respect and humbleness that we thread forward small steps at a time.”

Vinicius has broad aspirations for this indigenous line.

His goal is to enable self-sufficiency for the indigenous artisans they partner with by structuring the whole chain of logistics from production to delivery until the natives can fulfill and trade on their own.

Eventually, he would like to create an international marketplace where these artisans can sell and profit from their products in a non-exploitive and frictionless way.

Hiring and building a community around their business

Indeed, the morning we spoke with Vinicius and Carolina, they had been up until midnight the night before filling orders that had come in from across the world. As the co-founders of Incausa, they do this seven days a week. Such is the life of dedicated small business owners.

But help they found.

First, they asked a friend of a friend, then they asked their first employee to recommend another. It was never intentional, but now Incausa employs a handful of people, all from the from the Tibetan community in New York. 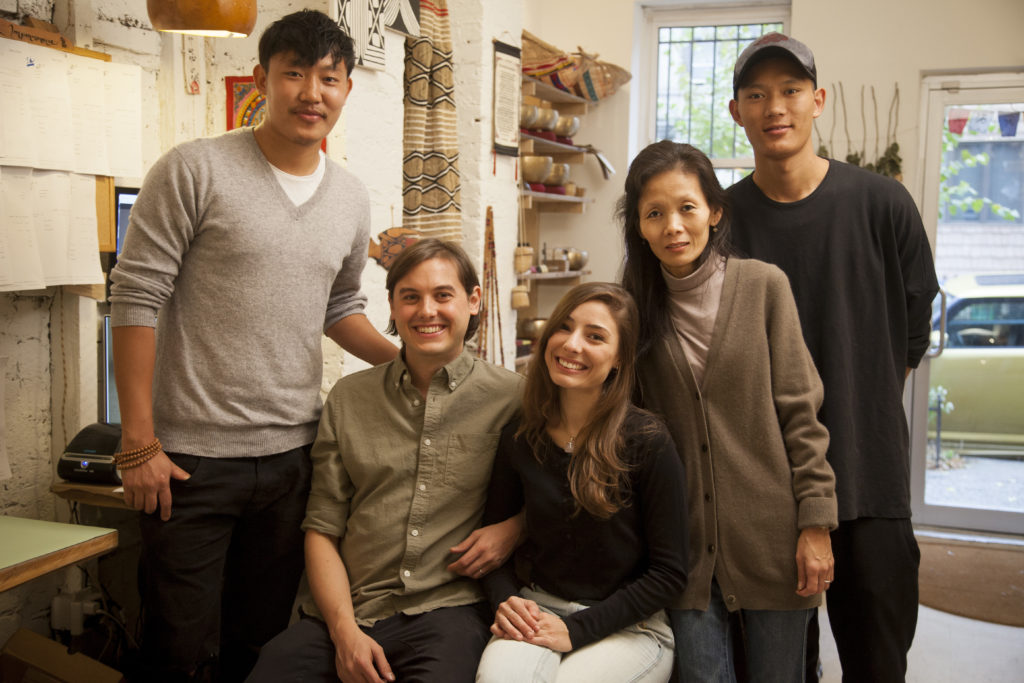 Vinicius says they never advertised a vacancy, but this word of mouth search strategy has led to a very “close, and strong team.”

As they’ve grown closer, he’s encouraged his employees to share parts of their unique culture with customers–much the way Vinicius has with his native Brazil.

Each time Incausa ships anything to a customer, one of the employees writes in elegant Tibetan Caligraphy, “This too shall pass.”

There’s something authentic and beautiful about the products Incausa sells. Likely because there are people making these products by hand. They put energy and intention into each piece they craft, each package they send.

This human touch, and uniqueness of each product they sell resonates with their customers. 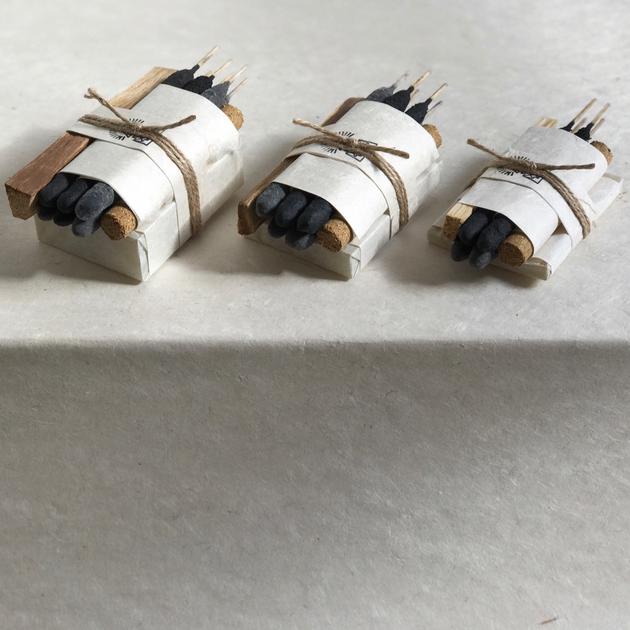 Ultimately, Vinicius and Carolina want to make Incausa an employee-owned company. And their goal is to give “most of the net profits backs as bonuses” at the end of each year.

Growing pains of success, and how community lending allowed Incausa to stay true to its mission

Counterintuitively, if you talk to enough small businesses you’ll find that one of the most challenging things can be too much success.

As Incausa got international news coverage and expanded, it grew too fast.

As the number of orders increased the demand for working capital skyrocketed. Balancing large inventory demands, paying all their employees, and covering monthly bills became a serious challenge.

In short, Incausa’s 160% growth in 2016 swallowed their cash flow. They were investing everything they made back in the business and it wasn’t enough to fund their growth.

This lack of capital was holding the business back, and Vinicius and Carolina considered selling off a significant portion of the company to raise funds.

They had a willing investor, but this offer was not without compromise. It meant giving up a controlling stake in the company and abandoning employee profit sharing, and potentially abandoning the indigenous line and social-enterprise focus of the business. 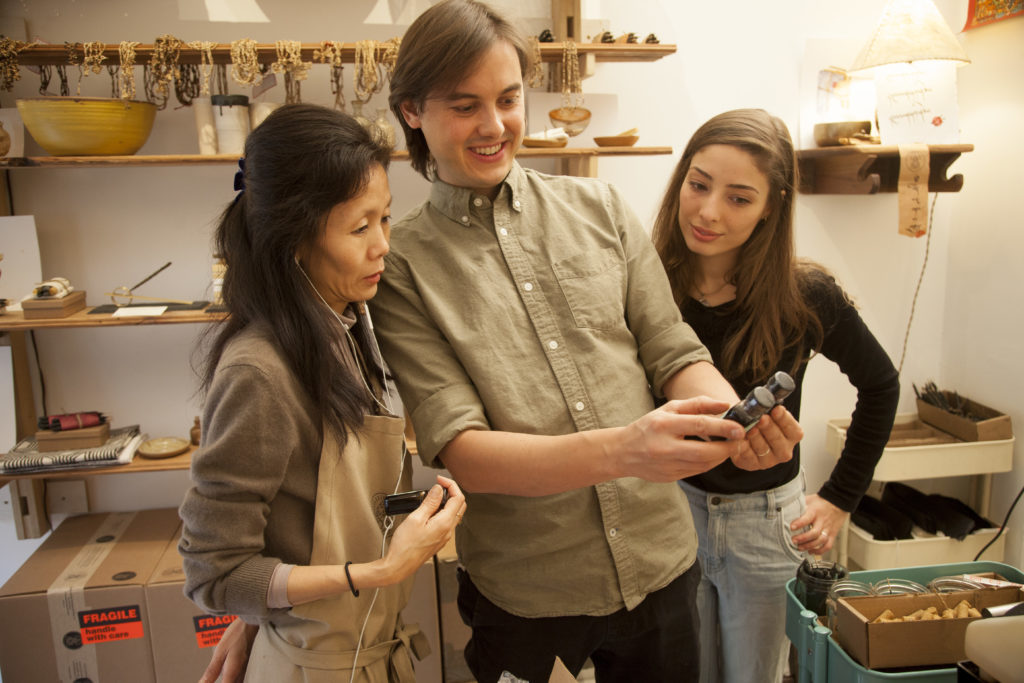 At one point Vinicius and Carolina thought they might have to sacrifice their vision to stay afloat.

Fortunately, Carolina learned about securing working capital at a small business finance class presented by New York Business Development Corporation in New York City. While at the event, she met a loan officer from NYBDC affiliate Pursuit Lending who provided her with information about several financing options that Pursuit offers for small businesses.

As a result, Incausa secured $50,000 in working capital in less than five days through an Pursuit SmartLoan®–a testament to the flexibility of community lending.

The even better news, Vinicius and Carolina retained full control of their business and their vision.

More than a loan – working together on a vision

For community lenders and CDFIs, borrowers like Incausa are not just line items on a balance sheet.

They are real people, with dreams.

While many lenders cut a check and wish their borrowers good luck, Pursuit offers business consulting services and works to make sure its borrowers succeed. It’s community lending, with a genuine focus on the community they serve.

As Vinicius recalls it, “I thought we were only getting a loan, but Alek (a member of Pursuit’s consulting corps) shows up with a list.” He helped them streamline processes and provided some helpful business guidance.

Vinicius says it was all “Incredible really,” and it helped them get things back on track and let them focus on their mission.

Today, Incausa’s products are found online through its Brooklyn-based e-commerce store and at more than 500 U.S. retailers.

This story about two brave Brazilians from Brooklyn that started a business that touches people all across the world, including indigenous communities in South America, reminds us just how impactful community lending can be.

If you want to invest in businesses like Incausa and help fund community lenders like Pursuit as they provide funding for amazing small businesses, you should invest with CNote today.