By Matt May 7, 2021 No Comments
Borrower Stories

For as long as Cheri Witt-Brown can remember, she’s known her way around a residential construction site. Her father owned a home-building and real estate company, and Cheri landed her first construction job — albeit picking up nails — when she was just three years old. She was paid a penny per nail for her efforts. Cheri has come a long way since those early days helping out with her family’s business, but the love that she developed for building homes is as strong today as it was when she was a child. 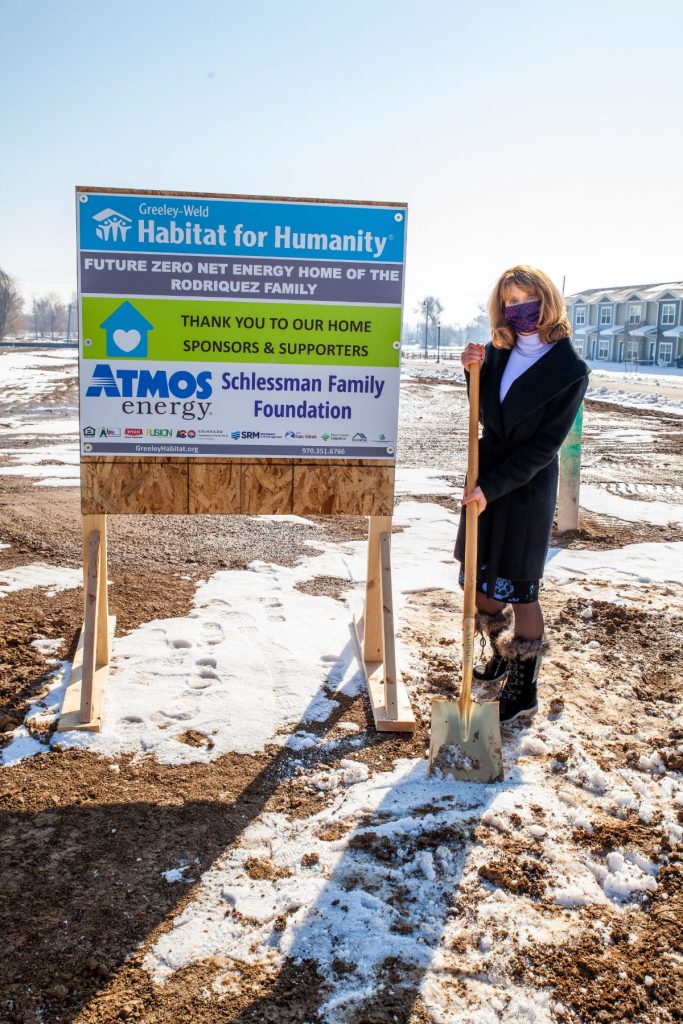 Cheri is the executive director of Greeley-Weld Habitat for Humanity, an affiliate of the international home-building nonprofit in Weld County, Colorado, a roughly Connecticut-sized county located on the state’s Front Range. Whereas the mission and organization are a natural fit for Cheri, she didn’t join the nonprofit until just over five years ago. Prior to that, she’d spent 25 years growing her family’s home-building business. Cheri spent the first 10 years working alongside her father; however, in the late 1990s, she bought the company from him and continued to run it until her retirement 15 years later. During that time, she simultaneously owned and operated a couple of design businesses and retail stores, and she dedicated a lot of time to doing volunteer work in her community.

A self-identifying “accidental entrepreneur,” Cheri didn’t consider a career in the nonprofit world until after she retired from her various for-profit business ventures and returned to Greeley, the town where she was born. Cheri’s first nonprofit job was with the local food bank, where she spent “three amazing years;” however, once the local Habitat for Humanity affiliate heard about Cheri’s construction background, they made a point to offer her a job every few months. Finally, the nonprofit’s persistence paid off. In October of 2015, Cheri left the food bank and took over the reins of Greeley-Weld Habitat for Humanity. According to her, it’s been one of the best decisions that she’s ever made. “When you’re kind of wired to build things,” she said, “that never leaves you, and you always just want to be building something.” 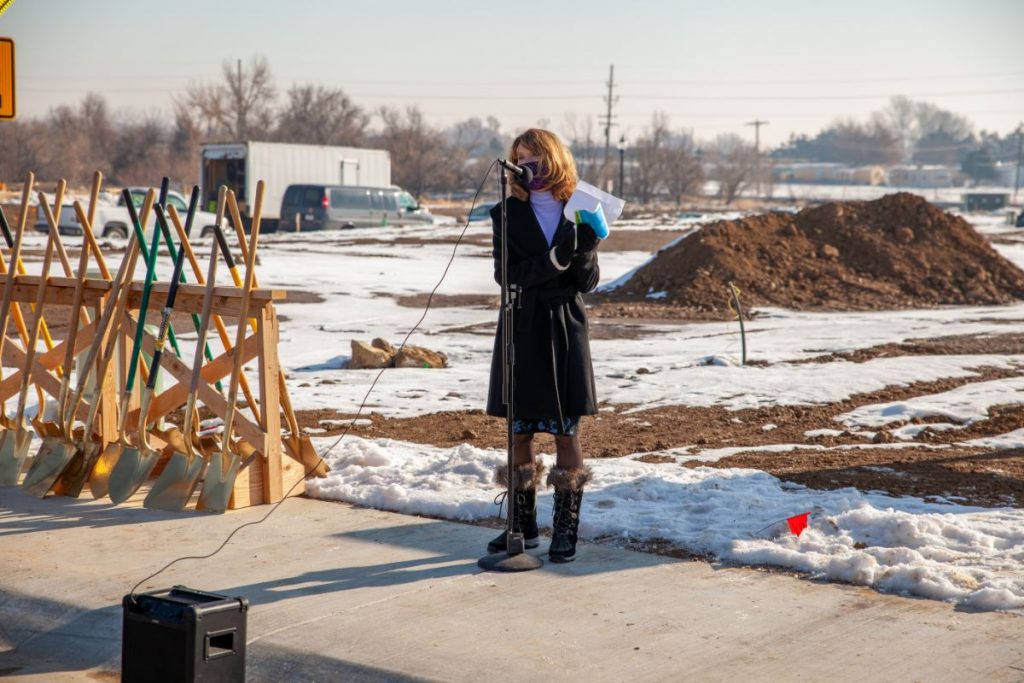 That doesn’t mean that the transition was easy for Cheri. Instead, Cheri soon learned that there was a stark distinction between the food bank and Habitat for Humanity in terms of being able to meet the needs of the community. Whereas the food bank had a steady supply of food coming in and the nonprofit could meet the needs of almost every family that walked through its doors, Habitat for Humanity was the opposite. Cheri says that for every 100 families that approached her and her team, they could maybe help one of them — in two or three years. “That wasn’t good enough,” she said. “And that became my personal motivation.”

Fortunately, unlike a lot of other areas in Colorado (and across the country), Greeley-Weld Habitat for Humanity still had affordable land around it. Cheri leaned into her background in building communities and real estate development, and she and her team set out to build affordable housing for as many community members as they could: an expensive deliverable, but an essential one considering that currently, one in five Americans pays more than 50% of their pre-tax income on housing.

Luckily, before Cheri even joined the organization, Greeley-Weld Habitat for Humanity already had a long-standing partnership with Impact Development Fund (IDF), a Colorado-based Community Development Financial Institution (CDFI) that creates economic opportunity by delivering flexible capital to develop and preserve affordable housing and nonprofit facilities in under-served communities across the state. CNote partners with CDFIs like IDF in communities across the country, channeling capital to fund social missions like affordable housing, women’s empowerment, entrepreneurial funding, and more. 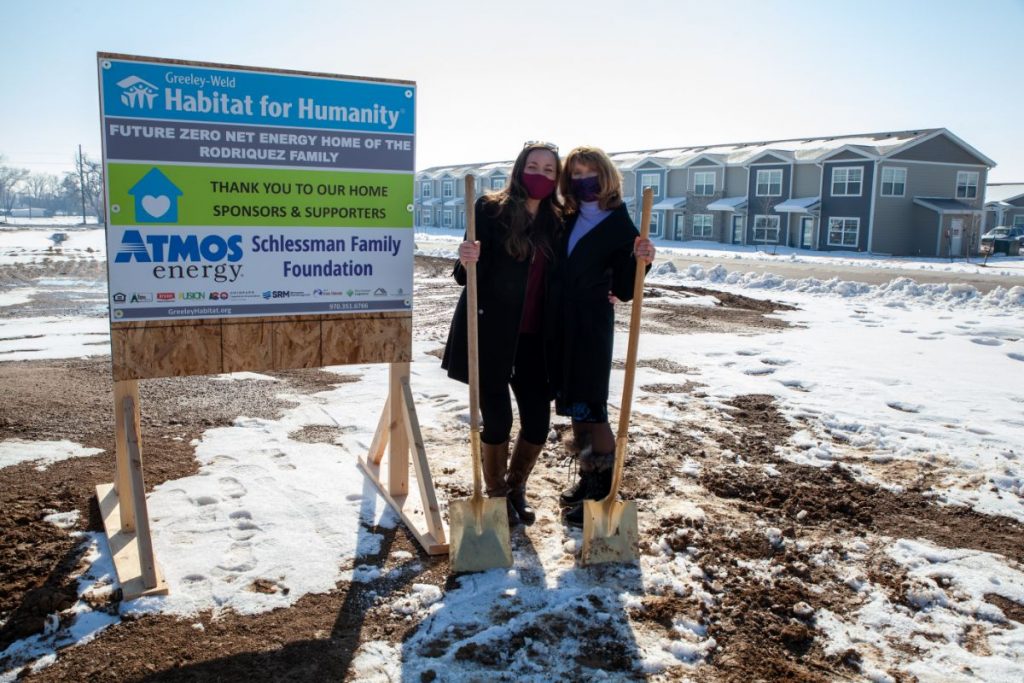 According to Cheri, IDF was instrumental in her onboarding at Habitat, and they helped her to navigate and understand some of the complexities of her new job as executive director. More than that, however, the CDFI has been an essential and ongoing source of capital and technical assistance for the nonprofit. For example, IDF extended a $500,000, 1% interest loan to Greeley-Weld Habitat for Humanity so that Cheri and her team could meet the match requirement to receive a $1 million federal grant to fund an innovative development project in Evans, which was devastated by floods in 2013. Whereas Habitat now owns those single-family homes and their co-developers Commonwealth Companies own high-quality apartment rentals, Cheri credits IDF with making it happen. “We would not have been able to meet those federal requirements and do that without that half-a-million-dollar loan,” she said. 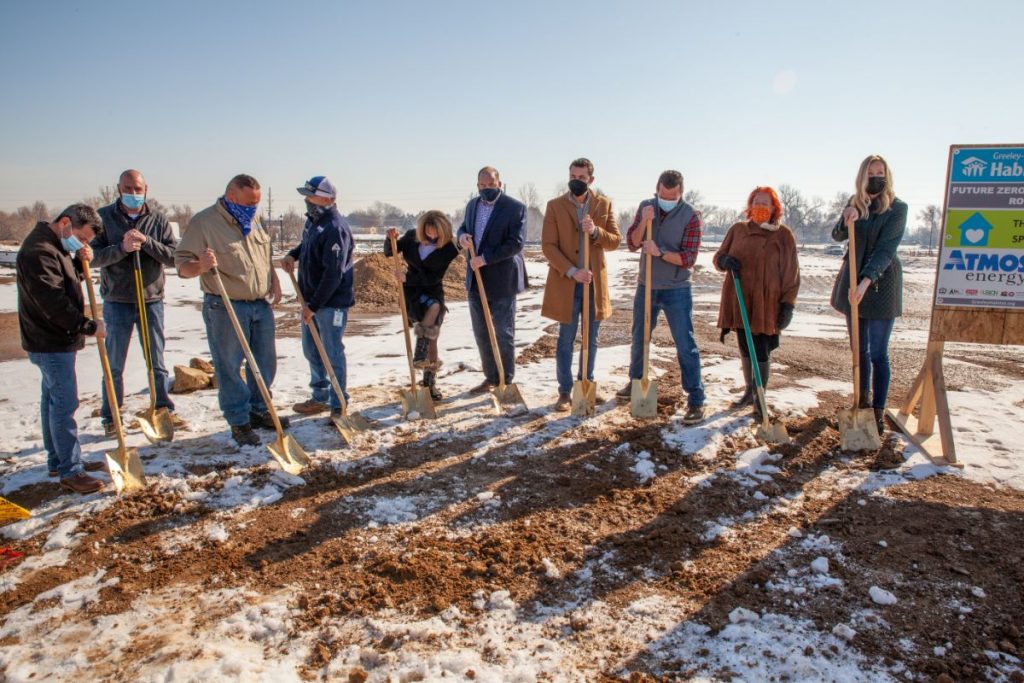 Since then, Greeley-Weld Habitat for Humanity and IDF have embarked on several projects together, and IDF has assisted Greeley-Weld Habitat for Humanity with strategic planning, messaging, and applying for grants. The CDFI has been particularly helpful in developing long-term financial modeling for Cheri’s team so that the nonprofit doesn’t over-leverage itself. That includes helping Habitat with technical matters ranging from legal requirements to underwriting to getting families into their homes. “They’ve been phenomenal at looking at the projects we have underway,” Cheri said, “and understanding what kind of financing and mechanisms we will need to bring those projects live.” 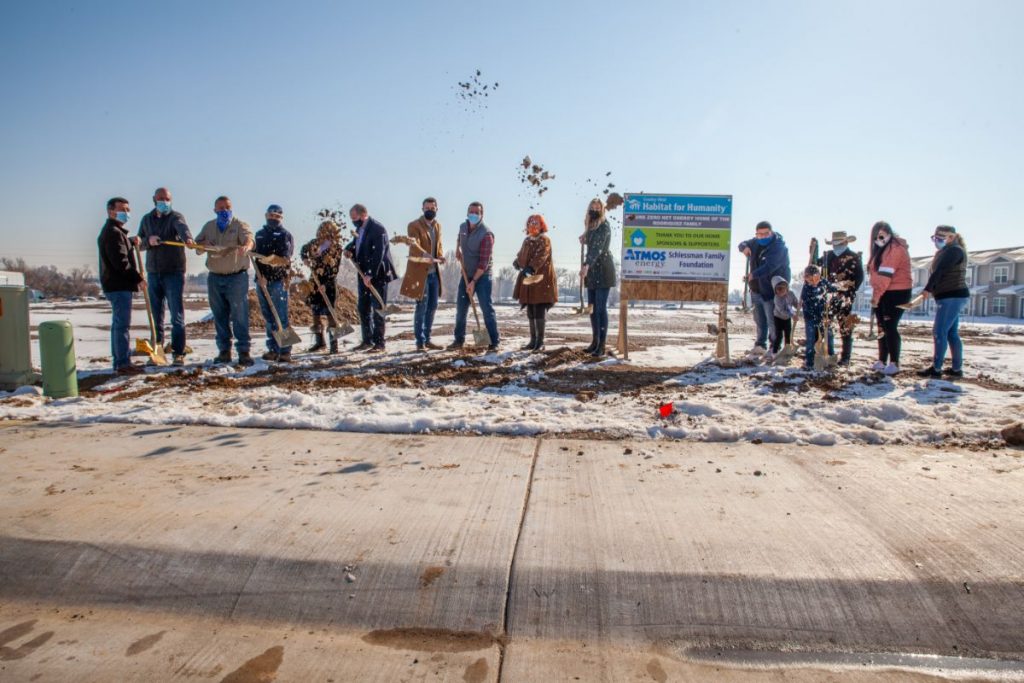 According to Cheri, IDF’s ability to make sure that Greeley-Weld Habitat for Humanity doesn’t just look good on paper but actually is good on paper has allowed it to attract larger projects, investors, and donors. For example, recently, a reputable, multi-density development and building company approached Cheri and told her that it wanted to donate 30 acres of land — a $16 million value — to Habitat so it could build 184 lots of affordable housing in Greeley. The mix of single-family homes and affordable rental units will be similar to what the nonprofit is currently completing in Evans. “Had we not been able to cast the vision for what a quality project like this could look like with Impact Development Fund,” Cheri said, “we wouldn’t be attracting these kinds of investors into our work at Habitat.” 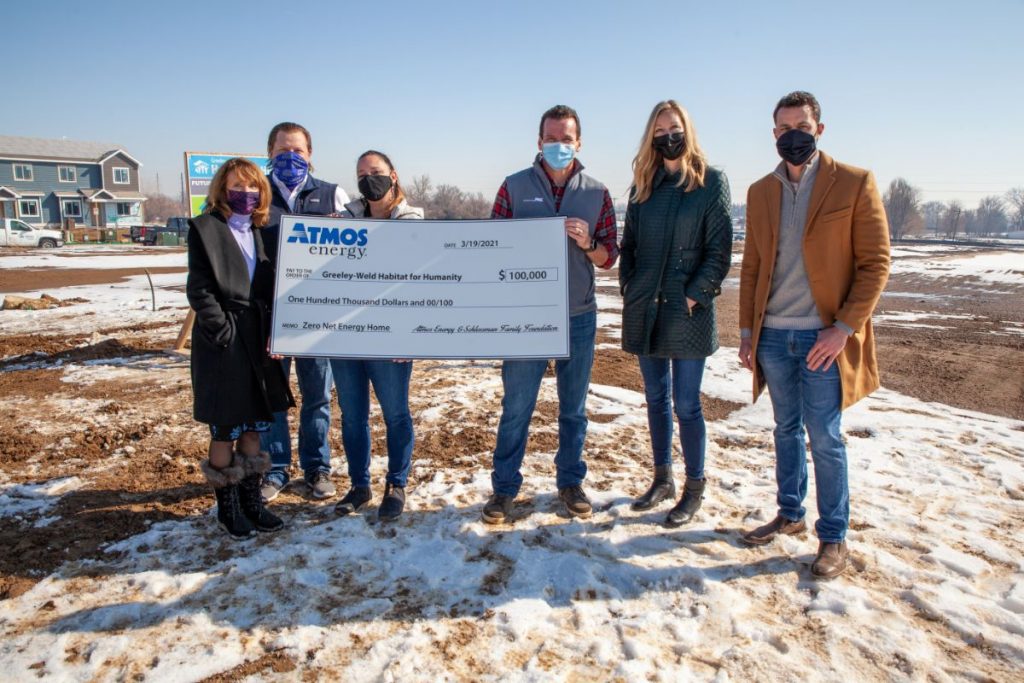 Building Affordable Housing for Everyone

In its 30-plus years of existence, Greeley-Weld Habitat for Humanity has built more than 160 homes; however, according to Cheri, prior to her arrival, the affiliate averaged building between three and five homes in a single year. Not surprisingly, that average has increased dramatically during her tenure as executive director. Incredibly, not only have Cheri and her team built more homes and housed more families during the COVID-19 pandemic than ever before in the nonprofit’s 34-year history, but they’ve done it without their usual army of volunteers. As is expected, slowing down isn’t in the blueprints. “My hope,” Cheri said, “is that we can eventually take this model of building a continuum of affordable housing and duplicate it all across Weld County and across the nation.” 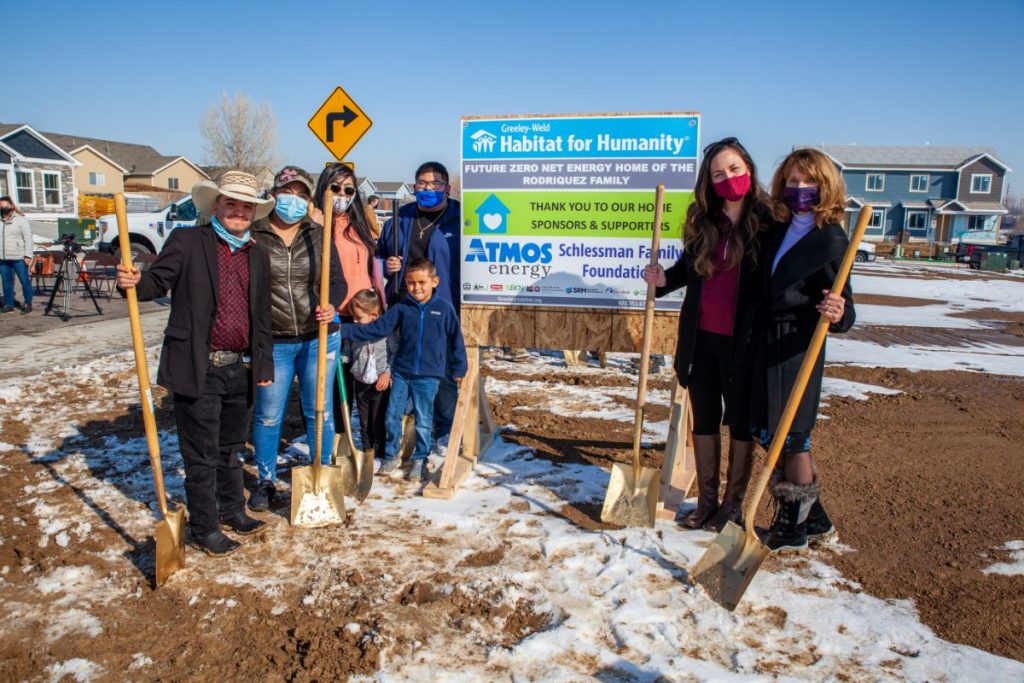 Since returning to Greeley, Cheri has grown deep roots in the community, and it’s not uncommon for her to walk down the street on any given day and run into a donor, an investor, a volunteer, or a family that she’s worked with at Habitat. Despite the joy that those encounters bring her, Cheri says that the most magical moments continue to be when she gets to introduce a family to their new home. “There’s just a look in their eyes,” Cheri said. “It’s relief, and it’s gratitude, and you can just see the sense that they can breathe knowing for certain that this is their home and that things are going to be okay for their future. It’s just such an honor and privilege to be a part of that.”